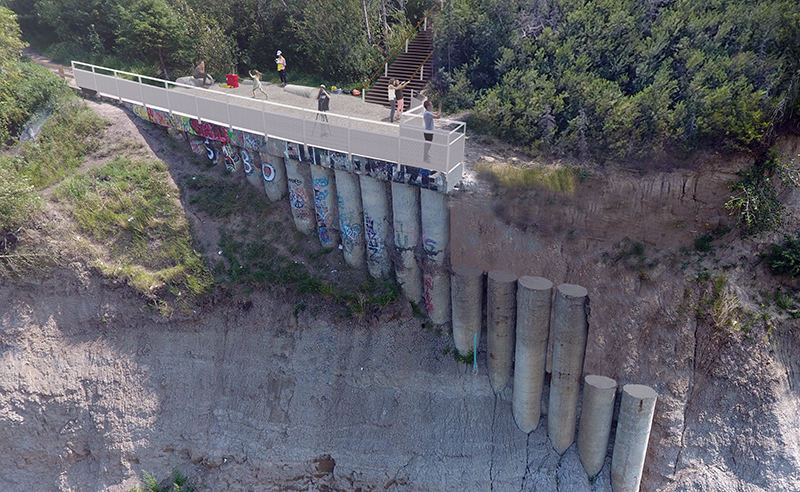 These summer to-dos aren’t as well known, but that’s part of the draw. From underground festivals to quaint summer eats, this list will have you wandering off the beaten path and into some of Edmonton’s best-kept secrets.

Edmonton’s known for a lot of secrets, including these nifty finds

When it comes to anything unusual, Edmonton has its fair share fair share of hidden finds, some of them tucked away in popular locations, and others requiring a bit of sleuthing to discover. We’ve taken a bit of legwork and heavy lifting out of the equation to provide you some background on just a few of them. From the air, this grassy refuge looks like everything converges to the centre of the world. Actually, you’d find yourself in a park in Old Glenora, with an ornate fountain and lots of bench space on the premises. Located by Stony Plain Road and 102 Avenue, even passers-by are unaware of the spot.

Find the park using THIS MAP

Who knows how many acoustic engineers it took to create this effect on the Legislature Grounds? Follow the footpaths north of the domed building to a giant brick circle and stand right in the centre. Now clap. Almost instantaneously, you’ll hear an echo of a squeak. Edmontonians can’t stand being told they live in the middle of nowhere, but at least they can claim being on the edge of the planet. That would be the retaining wall blocking remnants of the old Keilor Road from the river. See it from a distance via Saskatchewan Drive in the Belgravia neighbourhood.

It’s admirable that planners introduced this component as part of the Anthony Henday Freeway to accommodate wild animals who use the river valley to pass through the city undisturbed. For a chance to see nature using the facility, you can access it via the McTaggart neighbourhood.

At first glance, this sculpture in The Citadel’s Lee Pavilion looks like a flying saucer crash. But its creator, Roy Leadbeater —one of the city’s most celebrated artists— said it was inspired by the historic Apollo 11 moon mission and the Big Bang Theory. Either way, it’s an eye-catching display.

Edmonton’s Old Strathcona neighbourhood has more than its share of eccentricities, namely a six-storey mural by Spanish street artist Okuda San Miguel. Donations totaling $120,000 made possible this half-wolf, half-human caricature on the side of the Crawford Block, making it the city’s largest mural.

Edmonton’s weirdest surreptitious pastime consists of folks heading down to the Legislature Grounds to stare into one of the orange footlights aimed at the dome for 30 seconds. The result? You’ll see everything in a shade of purple for about a minute.

In Terwillegar Park lie three weird-looking installations meant to be seen and heard. Created by artist Royden Mills, one piece amplifies natural sounds, the other bounces those sounds while the third one is meant for personal reflection, probably to help make sense of those altered sounds.

Find the sculptures using THIS MAP Believe it or not, pelicans use this wetland spot that’s totally surrounded by industrial complexes on the south side. Just off Roper Road east of 75 Street, you’d never know you’re in the city, given the lush vegetation and abundance of animal life.

Find it using THIS MAP This sculpture is hardly a hidden find, since locals have complained about this installation at Fox Drive and the Whitemud Freeway for eons. But its real secret is up close where you can catch the reflective splendor of the sculpture, which depending on the sun’s position can get kaleidoscopic at times.

Find the Talus balls with THIS MAP