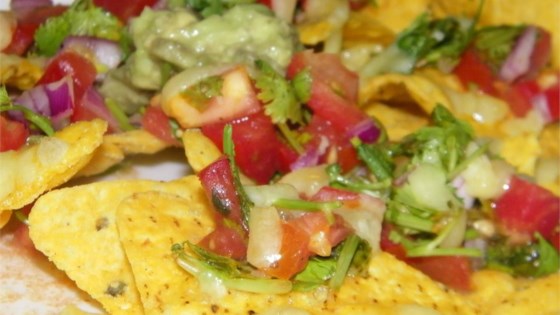 Yes, say it in “Mexican” —In Mexico, they are known as , which refers to the corn tortillas that form the base for all nacho variations.

Along time ago, in 1943 —The snack was invented circa 1943 by Ignacio “Nacho” Anaya at the Victory Club restaurant in Piedras Negras, Coahuila, Mexico.  The original recipe consisted of fried corn tortillas covered with just melted cheddar cheese and pickled jalapeño  peppers.

They’re that popular —International Day of the Nacho takes place every October 21 and was initiated by the United States and Mexico as a way to commemorate the invention and its international popularity.

Cravings —Nachos are said to be the food most commonly craved by pregnant women.

An inventive twist —If you want to get a little more creative than the basic toppings, other popular varieties include bacon, shrimp, chorizo, pulled pork, artichoke hearts, cilantro pesto, fried chicken, feta cheese and blue cheese.