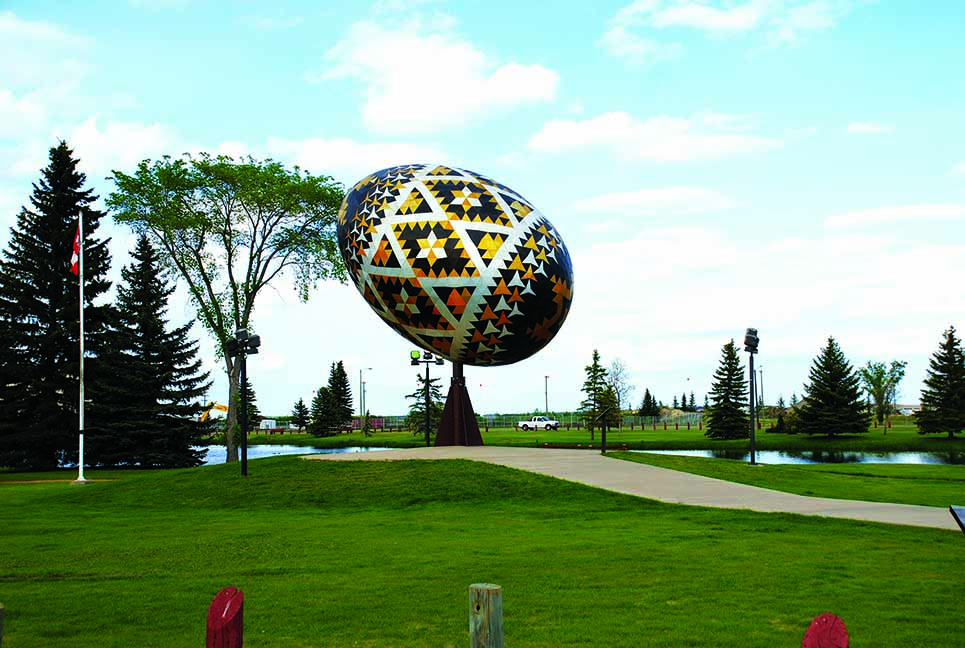 While COVID-19 has put a stop to many summer vacations, there is no reason to be totally housebound this summer. There are still things to do and see within a short drive of the area. The areas north, east, and northeast of the city are home to an array of unusual, memorable, and fun roadside attractions. Most of them are viewable from within a family vehicle, but as long as you maintain proper physical distancing, you can get closer–and enjoy some photo ops!

10 excursion options for your summer day-tripping

The 3.6-metre-tall statue on the lake shore was built to commemorate Lac La Biche’s bicentennial and to recognize David Thompson’s landing on the shores of the lake–a French translation from the Cree moniker of “Lake of the Elk.” Thompson was the first European to reach the shores of Lac La Biche, arriving in 1798 while searching for the elusive Northwest Passage.

You will see this landmark–the world’s first UFO landing pad–as you enter St. Paul from the west. It was built in 1967 and at its grand opening that June, St. Paul was declared the Centennial Capital of Canada. Located next door is a tourist information centre. The pad’s been a boon for tourism, including a few international UFO conferences.

You can’t miss the world’s largest sausage when driving through Mundare. It sticks out like a…big sausage. The 42-foot-tall statue is a tribute to Stawnichy’s Meat Processing, a family-run sausage factory founded in 1959 that is famous for its kielbasa. However, it’s not likely the family has ever produced a sausage as big as this one: it is over 5,443 kilos (12,000 lbs.) and made of brown fiberglass.

The Vegreville egg makes for an iconic photo backdrop. Located, appropriately enough, at 4500 Pysanka Avenue, the Ukrainian-style Easter egg was designed by artist Paul Maxum Sembaliuk and was unveiled in 1975. An intricate set of two-dimensional aluminum tiles make up the geometric patterns (524 hexagonal stars and 2,208 equilateral triangles, in case anyone wants to keep count) over an aluminum frame. Hey, a snow shaker replica of the Pysanka even made it into an episode of The X-Files.

The sculpture known as World’s Largest Mushrooms is located in the village of Vilna, just a block away from Main Street. The gargantuan fungi may look like something out of Alice in Wonderland, but is actually a giant replica of the tricholoma uspale mushroom which grows wild in the area and is often used as an ingredient in regional dishes. Mushroom hunting has been a tradition in Vilna since Ukrainian settlers arrived in the early 1900s.

If you love the doughy dumpling, you won’t want to miss seeing the World’s Largest Pyrogy in Glendon, on Highway 28. You won’t need a fork–the 8.2 metre sculpture which weighs 2,721 kilograms is already mounted on one, to make it more recognizable. It’s fiberglass with a metal frame and was built in 1991.

If it walks like a duck and quacks like a duck, it might be a testament to the sculpture of a mallard with a wingspan of 23 feet (7.2 metres). Weighing in at one tonne, the mallard was built in the village of Andrew to commemorate the wetlands areas in the district. It comes as no surprise that the area is a popular breeding ground for mallards. No actual mallards have ever been reported as being this size, however.

Not many kids can claim to shower beneath a giant water-spewing moose, but then not everyone lives by Bonnyville Splash Park, where the antlered behemoth is visible to spectators up to several blocks away. It’s probably the most unique aspect of the splash park, and if you have kids, they will get a kick out of it. The park is also located near some walking and biking trails if you’re up for more recreational activity.

If you feel like making the trip up to Cold Lake, a visit to the 4 Wing Gateway Park offers a number of aircraft on mounted display in striking poses near the roadway. You can park and gaze at such legendary fighter jets as the CF-5 Freedom Fighter and the CT-133 Silver Star, located outside Cold Lake Air Force Museum. If the museum’s open, more nifty displays await.