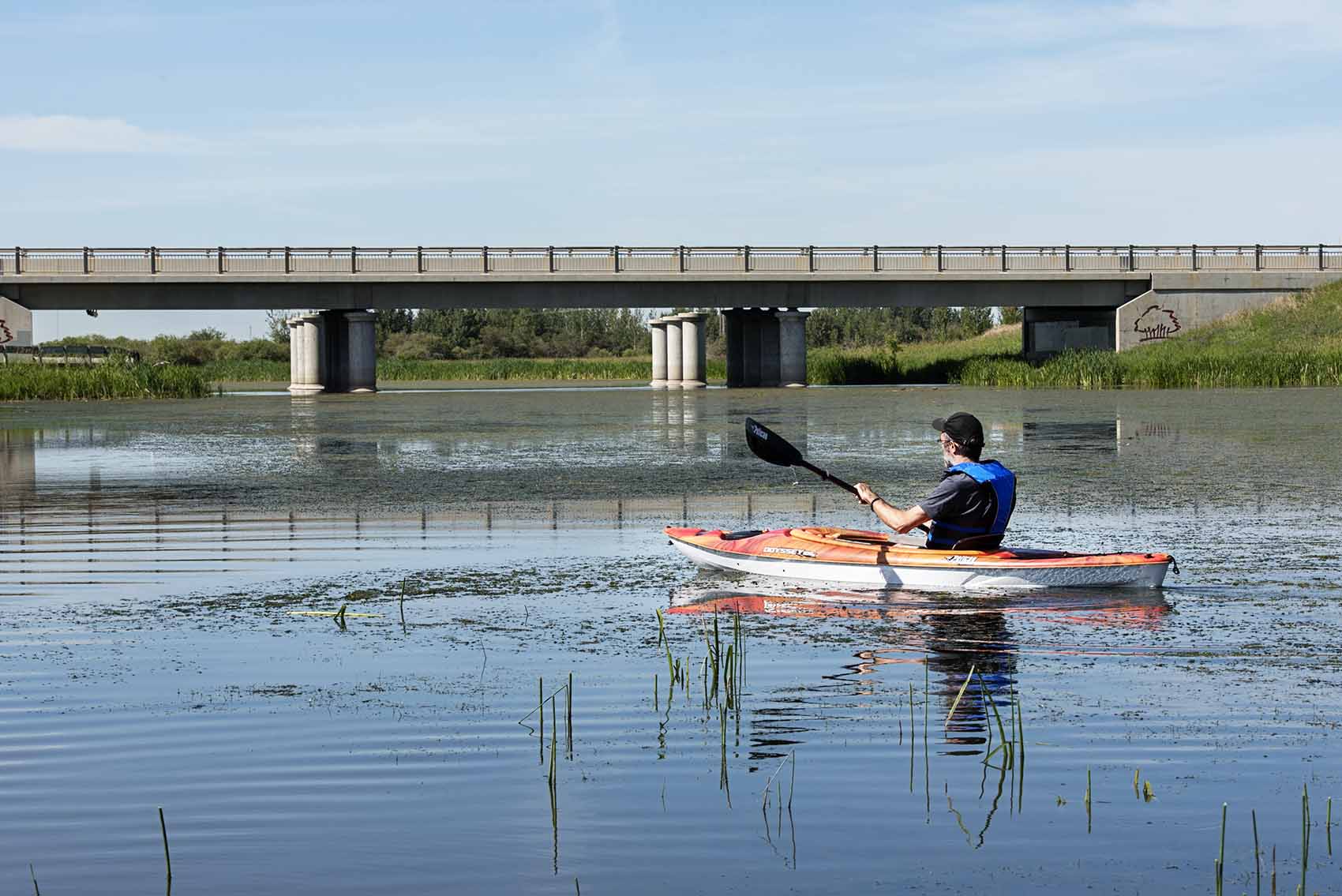 Experiencing a wilder, wetter side of St. Albert

The Sturgeon River has provided many different things throughout the central Alberta region’s history, from food and water to transportation, habitation and recreation. These days, a growing appreciation of the local waterway’s ecological importance and understated beauty is drawing many folks from the Edmonton area and surrounding communities back to the water. And there are so many ways to enjoy that water now, too, including by kayak. These ancient, low-impact watercraft are not only fun and easy to use, but also provide an entirely new perspective of our home by the river.

There’s no preamble, no safety lessons or even a kayaking 101 lecture. Within a few minutes of showing up at the boat launch in Riel Park, I’m on the water in a 12-foot, 50-lb. kayak, as if I’ve been doing this sort of thing for years. (I haven’t.) Not that there’s much need for formalities—unlike many other recreational activities, kayaking really is as easy as it looks. The distinctive boat sits low in the water, giving it greater stability than a typical canoe. Manoeuvrable and quick, it responds very well, even for the novice, darting forward with just a few strokes and (almost) stopping on a dime. It’s a comfortable ride, too—braces inside the seating area, including a backrest and footrests, make for easy, low-impact exploration.

The Sturgeon River is also a great venue for the first-time kayaker. According to Sean Demidovich of Active Recreational Rentals, the Sturgeon is a big draw for many of his customers, especially through the spring and early summer. A popular route for many clients is to float downstream from Riel Park to downtown or even further.

On this mid-July morning, however, weeds are already choking much of the sluggish river. Instead of heading off for a jaunt through town, for a few minutes I simply try out the area around the boat launch, getting a feel for the water. Unlike other modes of aquatic travel, kayaks really put you in touch with the thing you’re moving through—you feel you’re in the water, as much as you’re on it. I stop for a moment to watch the dark head of a muskrat bobbing past as it crosses from one bank to the other. Then I turn the kayak upstream and make my way to more open water.

Birds of a Feather

Another advantage of kayaks, at least as far as the soloist is concerned, is the paddle. The distinctive spoon blades at either end allow for more strokes and a rhythmic pace, as the kayaker isn’t constantly switching the paddle from one side of the boat to the other. This means kayaks tend to “track” (i.e. move in a straight line) more easily than other watercraft. While canoes don’t necessarily require more skill to paddle, the fact is even a beginner like myself can feel (and look) pretty masterful in a kayak.

Though there’s no current to fight against, I take my time as one of the river’s greatest draws soon reveals itself. The riverbanks and in the shallows of Big Lake are home to a great diversity of birds. I spot three dowitchers, plump birds on stick-like legs that poke for invertebrates in the mud with their long, sensitive beaks. As I coast toward them, the wary birds swim off into the denseness of the rushes.

Meanwhile, a male red-winged blackbird flies back and forth across the river, perching on the tall rushes on either side. While the females tend to stay out of sight, the males are gregarious attention-getters, with the plumage to match: glossy black all over with bright, orange-red shoulder patches that flutter beautifully when the bird is in flight.

Black terns are another recognizable species, spotted more easily for their distinctive hunting behaviour than their grey-to-dark colouring. Like dragonflies, they hover over the water and frequently dart at the surface when they spot a soon-to-be unfortunate bug or fish. They’re also known for aggressively defending their nests by dive-bombing anyone who wanders too close, to the point that the nearby boardwalk had to be shut down at one point.

In many ways, a kayak is the perfect way to explore the nooks and crannies of the Sturgeon and the lake it flows through. Those slow-moving waters offer little resistance, allowing paddlers to explore at their leisure. Compared to other watercraft, especially the motorized variety, kayaks have less of an impact on the environment. As self-powered vehicles, they don’t leak gas or oil into water and their lower speeds in shallow waters don’t cause erosion to shorelines.

On the other hand, any vehicle (and the human presence that accompanies it) causes at least some disruption to fragile ecosystems. The fact that kayaks can go places other vehicles can’t—like uncomfortably close to nesting areas—places the onus on the user to enjoy this environment responsibly. It’s one good reason why Alberta Parks has considered enacting a total boat ban for Big Lake as part of the draft management plan for the provincial park that surrounds it.

Such a ban would be disappointing to some boaters, but it would be understandable. The lake, the centrepiece of Lois Hole Centennial Provincial Park, is known for its wetlands habitat, an ecosystem valued for its ability to absorb and purify large amounts of water, process carbon and inorganic nutrients, stabilize shorelines, and provide food and homes to a wide range of plants and animals, especially birds. Wetlands are considered the most biologically diverse of ecosystems, and at Big Lake it’s easy to see why. Up to 237 bird species have been recorded there, with around 180 reportedly using the site annually. Due to this diversity of life, and the importance of the provincial park in conserving the wetlands, Big Lake is recognized globally as an Important Bird and Biodiversity Area (IBA), a listing developed by BirdLife International to recognize important bird habitats around the world.

After two hours of paddling, with the water refracting the midday sun and a blanket of heat hazing the surroundings, it’s time to head back to Riel. Like other journeys, things look different on the return. On the horizon, new subdivisions are going up as a fast-growing city, by necessity, swallows up the open spaces around it. One wonders how we’ll experience this and other natural places in the future, and if we’ll be able to balance a newfound appreciation with the competing demands of development, recreation, and conservation.

THIS STORY WAS PREPARED WITH THE PARTICIPATION OF A BUSINESS THAT IS NO LONGER OPERATIONAL. IT WAS CALLED ACTIVE RECREATIONAL RENTALS.