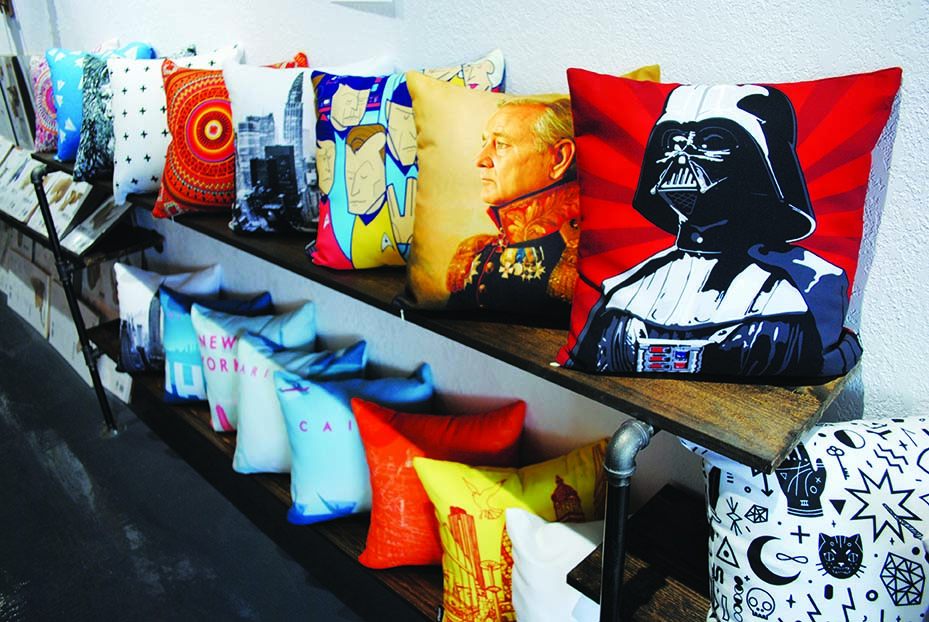 Getting eclectic on 124th Street

The Prints and the Paper, located on 10725-124th Street, is a difficult place to pin down. Equal parts graphic art gallery, independent bookshop, stationery seller and picture framer, it feels like the gift shop of the coolest museum you’ve ever visited. Not by accident, either. Owner Sandy Muldrew describes the store as a curated shop of sorts—a place where he can sell the things he loves. The results, besides being an endorsement for doing what you love, is a much-needed reminder of the value and viability of brick and mortar in Edmonton.

Yet, despite that lesson in viability, The Prints and the Paper, which opened in 2016, might not exist today if it wasn’t for certain jobs becoming redundant or obsolete. A TV editor for close to 20 years, Muldrew worked at the old A-Channel (now City) and at CBC-Edmonton. While there, he also managed and then co-owned the much-loved Sneak Preview Video in Duggan, which gave him his first taste of running a small business. In 2011 Sneak Preview went the way of most video stores, and a few years later CBC decided to eliminate all its dedicated editors. Finding himself out of work, Muldrew decided to take the leap and become his own boss.

“This was sort of my retirement idea,” Muldrew explains. The concept for The Prints and the Paper was born of his various interests and skills: silkscreen printing, framing, film (there’s a Wes Anderson shrine by the front door), illustrated books and so on. It also came from an absence he noticed of galleries selling graphic art—and not just in Edmonton.

“I’ve been to New York, London and Paris, and have never seen this type of art for sale,” he says. “It’s always fine art, like paintings and photography, but never silkscreens.”

The decision to open on 124th Street took some time, but in the end it was an easy one. He looked around and was close to buying a space a block south of Whyte Ave., until some friends he was showing it to noticed a problem.

“We were there at one in the afternoon, and there was no one on the street,” Muldrew says. “This type of store needs walk-in traffic.”

The eventual location sees a lot of pedestrians, and many have discovered the store while visiting the Duchess Bake Shop across the street. With the presence of other independent shops in the neighbourhood, and the return of the 124 Grand Market to 108th Avenue this summer, the potential for curious shoppers dropping in is always high. Finding a great location for a store, however, is easier than actually opening one. “It was a lot harder than I thought,” Muldrew says.

“I thought because I owned Sneak Preview, that ‘Yeah, I can do this, I’ve done this before.’ But that was an established store.”

The Prints and the Paper, on the other hand, had to be started from scratch. Besides having to negotiate rent and secure funding, there was also the physical work that Muldrew and his brothers put into renovating the space before its doors could even open.

Then came the challenge and cost of keeping the store replenished. Muldrew has to deal regularly with numerous suppliers, including book publishers, greeting-card publishers, framing-supply stores and artist collectives. “With the video store business, once you bought the product, you could just keep renting it out,” Muldrew explains. Now he has to replace stock constantly and stay within a budget. “That’s been a bit of a surprise, how much it costs. You want to expand your stock, but it’s tough unless you’re making a lot of money.”

Business ledgers aside, the experience of running The Prints and the Paper has been hugely rewarding for Muldrew. There’s the undeniable joy of selling awesome stuff, much of it ephemera he owns himself. An example is his large personal collection of illustrated books that he used as a starting point for the books he now carries in-store. Other items he has found on his travels, or through customer recommendations, or by happenstance: the Cardboard Safari animal heads he bought in Amsterdam; the NYC water tower model kits he discovered in a museum gift shop there; or the CITIx60 travel guides he found by chance in a publisher’s catalog while searching for another book.

But even better are the personal conversations he has with pleased customers.

“That’s really gratifying (and) good for my ego,” Muldrew says. “I get so many compliments about the store… people are happy I’m here.”

The store’s positive reception in the neighbourhood is a good sign of the vitality and future of 124th Street, which Muldrew describes as nearing a “tipping point.” It’s also a ringing endorsement of the independent storefront shops that the area is known for. “It gives character to the neighbourhood, and it’s enjoyable to come down here,” Muldrew explains. “I know a lot of people by their first name now. It’s become a destination for quite a few people.” As it turns out, people know a good thing when they see it. If you work up an appetite shopping on 124th, check out one of these recent arrivals for a quick bite:

A snack shop specializing in small-batch soft pretzels served with a full assortment of homemade cheese dips, mustards and sauces.